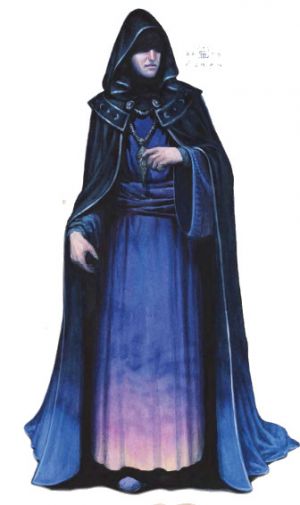 Mistaken by many for one of the Old Cults, the Night Heralds do not worship anything as simple as a god, alien or otherwise. Instead, they view themselves more as diplomats and scientists-in the black places between the stars, the Night Heralds find not only their inspiration, but also the empire they beckon to Golarion: the mysterious Dominion of the Black. It is the ultimate goal of many Night Heralds to someday be chosen by one of the brain-collecting neh-thalggu-the most numerous contingent within the Dominion-and have their brains plucked from their skulls, adding to those used by the alien spellcasters. The Night Heralds believe this affords them a sort of immortality, allowing their consciousness and minds to merge with the Dominion and live on forever. Colonization of the world by the Dominion of the Black is an eventual certainty to the Night Heralds, and they hope that by preparing Golarion for a swift and easy invasion, they will be rewarded by attaining this grisly form. How they go about this varies from cell to cell, but often involves pursuing lost items and carrying out blasphemous rituals related to the Dominion and the spaces between the stars.

Dominion and the spaces between the stars. When not involved in cult activities or study in hidden monasteries or underground grottoes, the typical Night Herald goes about the routines of everyday life. She avoids taking on significant roles in society, preferring to work at inconspicuous j obs to afford her greater freedom to pursue her true goals, though if the cultists determine that getting a member into a key leadership position will help them realize their dream, they stop at nothing to attain this goal. For the most part, Night Heralds reveal themselves publicly only in remote villages where nearly the entire populace has been inducted into their beliefs.

While not large, the cult is widely dispersed across Golarion. Individual cells have only intermittent contact with each other, each preferring to act alone in its preparation for the inevitable colonization. During rituals, Night Heralds wear robes colored at the bottom with the vibrant hues of sunset, yet as the eye travels upward, these colors darken to deep purple, finally culminating in a midnight black hood. The vast maj ority of Night Heralds are arcane spellcasters or rogues; divine spellcasters are almost all oracles and are a minority. Faith in the divine is simply not of interest to the Night Heralds, although they are fond of allowing their enemies to think otherwise in order to keep foes misinformed and ill-prepared.

Membership in the Night Heralds requires a fanatic level of devotion to the cause, making this secret society a poor choice for most PCs, but members of the group can serve very well as NPC villains for a campaign, and it's possible that a night herald might try to attach herself to a party if she learns the PCs are pursuing an artifact tied to the Dominion of the Black.[1]

This loosely affiliated regional cult of lunatics and maniocs is dedicated to preparing this world for harvest by the Dominion of the Block.

Contact (+1Fame): Once per year, you can see kouta representative of the Dominion of the Black. This could be an actual member of the alien empire, a member of a distant branch of the Night Heralds, or some other expert on the subject. Success at this task requires that you record what you learn from the contact in anencoded document by succeeding at a DC15 Linguistics check.

Sacred Rite of Opening (+2 Fame): All new members of the Night Heralds must undergo the Sacred Rite of Opening. Undergoing this ritual immediately increases new initiates' Fame scores; current members can undergo the rite again to increase their Fame scores further, but no more than once every 5 years. This grisly ritual takes 2 hours (the ones preceding and following midnight), during which other Night Heralds perform a trepanation on the back of your skull to expose your brain to the night sky. The character performing the Rite of Opening on you must attempt a DC 25 Heal check.

If she succeeds, you take 1d6 points of Constitution damage and 1 point of Wisdom drain. If she fails, you take 3d6 points of Constitution and Intelligence drain. Sacrifice (+1 to +5 Fame) Once per year, you can offer a sacrifice to the Dark Tapestry by ritually trepanning a living, intelligent victim. Doing so grants you a bonus to Fame equal to the CR of the sacrifice divided by 5.

Insane (20 Fame, 4 PP) You have finally succumbed and become insane, yet your madness does not cripple you as it would a mind less accepting of the condition. Reduce your Wisdom score by 6—this is a permanent reduction that can only be restored by greater restoration or more powerful magic (though if this occurs, you lose all benefits of this award). You can now use your Charisma modifier on Will saves instead of your Wisdom modifier, and you are immune to effects that cause insanity or confusion.

Madness Resistance (10 Fame, 2 PP) Long hours spent pouring over blasphemous texts, using mind-altering drugs and poisons to enhance your perception, and gazing into the abyss above have inured your mind to madness. You gain a +2 insight bonus on all saving throws against effects that cause insanity or confusion. Research Specialist (1 PP) Levels in the loremaster prestige class count as favored class levels for you.

The Night Heralds can be encountered anywhere across the face of Golarion, for wherever the darkness between the stars exerts its fell influence, the Night Heralds are active. In distant Vudra, the cult is unusually public in its atrocities and is regarded as a significant menace. Among the lizardfolk of Droon in southern Garund, the Night Heralds are a shameful burden from the past that stubbornly resists all efforts to be expunged. In the Crown of the World, entire villages of Erutaki serve in thrall to the Heralds' madness, and speak of nights of "dark auroras" when the stars lose their luster and visitations from the Dark Tapestry seem all too common. In the Inner Sea region, a cell of the Night Heralds could be found nearly anywhere, but they are most active in the following four regions.

Numeria: The Night Heralds of Numeria focus their interests in the wilds of this region, scouring ruins in the Felldales or along the nation's borders far from Starfall to avoid conflicts with the Technic League. They are less interested in technological artifacts than lore and information scavenged from the old wrecks. These cultists often count malfunctioning androids among their number.

Osirion: The Night Heralds of Osirion are often obsessed with the mysteries of the Aucturn Enigma. They use ancient tombs as their headquarters, so adventurers exploring a crypt might find themselves suddenly facing living spellcasters when they were expecting the undead. At least one cult focuses on an entirely different subj ect-an exceptionally powerful alien lord of the Dominion of the Black. This creature, known as Tychilarius, is believed to be trapped somewhere in Osirion, and the cult believes the alien's freedom might be the beacon the Dominion of the Black awaits beforelaunching its invasion.

Sodden Lands: The Night Heralds were an active force in Lirgen before the Eye of Abendego transformed the nation and its neighbor, Yamasa, into the Sodden Lands. Before the storm, the Night Heralds had an uneasy alliance with the Lirgeni astrologers known as the Saoc Brethren. Each group acknowledged the other's skill and lore concerning the night skies, even if the reasons for their astronomical obsessions differed wildly. Yet when the Age of Lost Omens occurred and drove the Saoc Brethren mad, the Night Heralds weathered the transition with ease. Today, many of the ruined observatories of lost Lirgen serve as strongholds from which the Night Heralds manipulate nearby tribes of boggards and sodden scavengers alike into serving as unwitting pawns and protectors.

Ustalav: In Ustalav, the Night Heralds are most active in the county ofVersex, where they often find themselves in conflict with agents of the Old Cults who also pursue ancient texts or alien artifacts. The largest cult in Versex is based in Thrushmoor, and possesses numerous ties to that city's scholastic pursuits and centers oflearning. An adventuring group facing the Old Cults in this region might well find themselves temporarily allied with the Night Heralds, although one must always take care when dealing with those who think the world is nothing more than a vast farm for alien overlords.