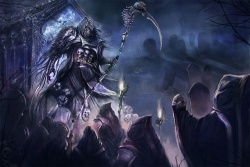 Zyphus (pronounced ZIE-fess[1] or ZAI-FUSS[2]) is the malignant god of accidental death. A bitter enemy of the goddess Pharasma, he is worshiped by small cults throughout Golarion. These groups foment tragedy and bring about accidents in the hopes of strengthening the power of their god. His symbol is a pick made from a human skull, rib, and femur.[3]

Followers of the Grim Harvestman believe that the god arose from the first maddened soul to die a pointless death. It is written that since that time, every mortal that dies in the same meaningless way is destined to be absorbed by Zyphus after death. This puts him in direct competition with the goddess Pharasma, and his followers believe that once he has acquired enough souls he will be able to engineer the death of Pharasma herself. Cults of Zyphus believe that even though the deaths they help arrange are not truly accidental, these souls are still dedicated to strengthen their patron.[3][4]

Zyphen cults are widespread, although never large in numbers. They worship in abandoned graveyards that are no longer under the protection of the Lady of Graves.[3] His symbols are often found on arches or vaulted roofs of active graveyards as well, but there are meant to ward off the Grim Harvestman.[4] Recently, Zyphen cults have been active in Taldor.[5]