Dahak is the patron deity of evil dragons, particularly the chromatic dragons.[1]

Dragons believe Dahak was one of the original gods created by Apsu and Tiamat at the beginning of creation. While the other deities began to create, Dahak chose to destroy. He is credited with transforming Hell into a place of agony and flame. He is also believed to be the creator of the metallic dragons, which he formed solely to hunt as sport. Seeing the destruction and chaos wrought, Apsu entered the Material Plane in order to end Dahak's reign of terror. However, Tiamat saw Dahak as a son and wanted him spared. In a deal to save Dahak, Tiamat healed some of the wounded metallic dragons. These dragons became the original chromatic dragons. The battle between Apsu and Dahak still rages on Golarion.[2]

Interestingly, despite his known destructive nature, Dahak was among the original gods who battled the Rough Beast who sought to destroy Golarion, and were eventually able to contain him in the Dead Vault during the Age of Creation.[3]

Some believe that Dahak created wyverns and drakes in an effort to create his own draconic servitors, although others point out that this act of creation contradicts his destructive aspect. He is nevertheless worshiped by wyverns and drakes as their creator.[1] 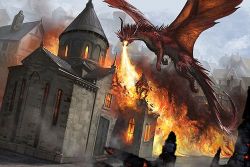 The only descriptions of Dahak tell of him as ugly, scarred, and covered in spikes, with a burning hatred in his eyes for his father, Apsu.[4]

There are few dedicated cults to Dahak, partially because his worshipers mostly consist of serpentfolk and especially evil dragons, with humanoid followers being a rarity. Worshipers have been known to wear their unholy symbols proudly, safe in the knowledge that few people would even recognise their religion. The greatest sacrifice his followers can hope to make is that of a metallic dragons, and these cults often dedicate themselves to this task above all else.[5]

Most dragons view Dahak with hate, but some evil dragons choose to serve after being offered power and immortality.[2][4]